Please visit my about me page and Blog & site page to learned about my passion and to understand what I am hoping to share with my posts and pages. Do not hesitate to email me with subject or person you are seeking info. It will be my pleasure to send you all I have about the subject or person. I add lots of info daily and for each resources I share I provided as many surname and more that may be found in it and to make it easier using the search box to receive all source that refers to your search! 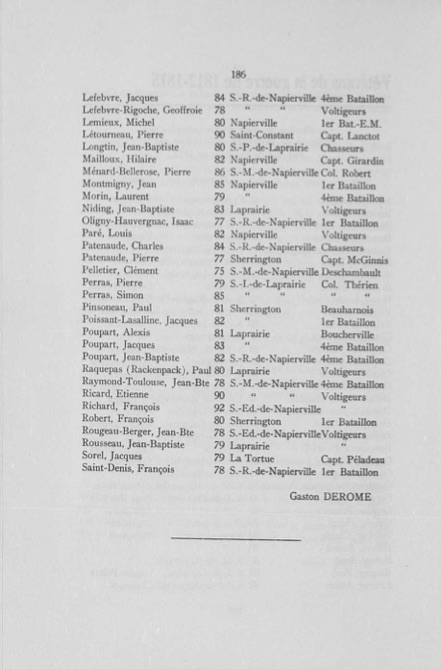 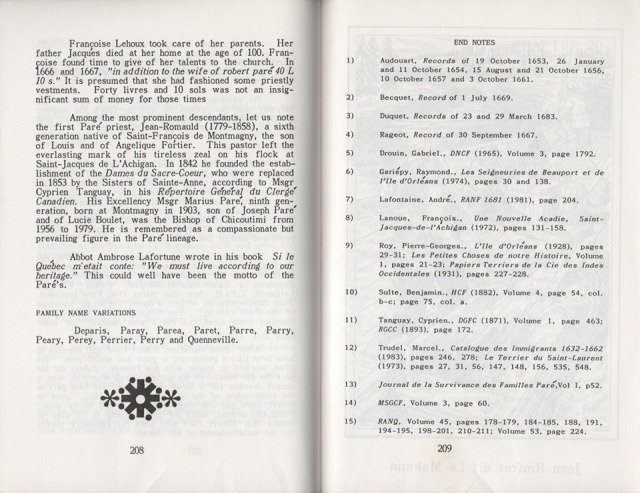 Françoise Raclos signed, on December 2, 1671, a marriage contract with Michel David, son of Claude David, written by La Rue, in Champlain, in the house of René Beaudoin and Marie Raclos, “before noon”. We have almost the entire text of this contract, which gives us a good example of what Nicolas and Madeleine’s would have looked like.

Before Guillaume de Larue, notary in the jurisdiction [and] seigneury of La Touche Champlain, were present in their persons, Michel David, son of honorable man Claude David, resident of the said place, & Suzanne Denoyon, his father and mother , Firstly and of damoiselle Françoise Raclos, daughter of honorable man Idebon Raclos and of damoiselle Marie Viennot, her father and mother, on the other hand

Which parties declare, [willingly and willingly, and in the presence of their parents and friends for this [do] assembled, [namely], on the part of the said Michel David, Etienne David and Claude David, his brothers, and of Etienne Pézard, squire, Sieur De La Tousche, lord of this said place, of damoiselle Madeleine Mullois, his wife, of Guillaume David, of Marie [Armand, his wife], of Jean Denoyon, of Marie Chauvin, his wife, of Guillaume Denoyon, all uncles and aunts of the said Michel David, of Master Antoine Desrosiers, of Anne du Hérisson, his wife, of Michel Godefroy, squire, Sieur de Lintot, of damoiselle De Belestre, his wife, of Sieur Pinard, Master surgeon from this place, from Madeleine Hertel, his wife,

And from the so-called damoiselle Raclos, René Beaudoin, from Marie Raclos, his wife, from Nicolas Perrot, from Madeleine Raclos, his wife, & from Sieur Couillard, from Sieur Latour. We make and grant their treaty and promise of marriage which follow, that is to say, that said Michel David had promised and promises to take for his wife and legitimate wife, the so-called damsel Françoise Raclos, as also the said Raclos promised and promises to take the said Michel David for her husband and legitimate husband, here the marriage made and marriage [celebrated] in front of our holy mother catholic apostolic and Roman church as soon as possible, and that he will be advised and deliberate between them and their aforesaid relatives and friends, if God and our holy mother church agree and [agree] so [that Michel and Francoise can] be the so-called future spouses, one and the other in their property, furniture, assets, conquets [and] buildings, [from] the day of the nuptial blessing.

The so-called future wife will be gifted with the sum of six hundred pounds of dower, prefix limited or customary customary, at the option and option of the said future wife as long as dower takes place according to the custom of the prepost and viscount of Paris, and if there was any debt made or created by one of the said future spouses before their marriage, it will be discharged on the good of the one who made them without the good of the other being able to answer for it. The father of the future husband will give his son a four acre front home which he has on the Pépin river; promised to help him make a house on this house to be done in summer ……. next ……….; moreover more promised …….. of the said future wife of the left of all debates if none there is some …… consumption of the future marriage.

This day of the twelfth (month of) December one thousand six hundred and seventy-one.

The said Michel David and Claude David …………. Suzanne Denoyon ………. declared not knowing how to write (and) did not sign, from (this) that following the order, have made their mark.

We recognize certain characters who were introduced to us during Nicolas’ marriage, including: Etienne Pézard, squire, Sieur de La Tousche, present as lord of the place, accompanied by his wife, Madeleine Mullois; and Pierre Artault, Sieur de La Tour, “ordinary judge” of the premises.

Jean Denoyon was an arquebusier, armorer and master tailor. July 1665) was the widow of Rollin Langlois (died January 1665), who also had been an arquebusier and armorer. Moreover, Claude David was himself a gunsmith (qualified as such during a trip to Lake Superior in 1660), and Guillaume Denoyon, who was single and lived with his brother Jean at the time, perhaps practiced the same profession.

Antoine Desrosiers had been close to Claude David for a long time. Since at least 1647, they lived inside the palisade of the borough of Trois-Rivières (lots conceded in June 1650 on rue Notre-Dame). A little later, they each obtained a concession on the “Chemin des Coteaux” (that of the current rue St François-Xavier) in the “suburb” of the town: Antoine, in 1649, a land of 5 arpents on the path by 5 arpents deep towards the Saint-Maurice river, and Claude, in 1650, on the opposite side of the path, opposite Antoine, a land of 24 arpents front on the path by 2 arpents deep towards the South West. On March 17, 1665, they each obtained in Champlain, side by side, a concession of 3 arpents front on the Saint-Laurent river by 40 arpents deep.

Sieur Couillard: undoubtedly it is Pierre Couillard. During a trial in April 1659, he was described as “servant” (in the sense of employee and not “servant”) of Jacques Le Neuf de la Poterie. The latter was a fur trader, interim governor of New France in 1665, and uncle of Michel Godefroy. In the 1666 census, we note that Pierre Couillard has two servants, Pierre Millet and Joachim Reguindeau, in his service. In 1684, his daughter Marie-Jeanne signed a marriage contract with Claude David, son of Claude and Suzanne Denoyon.

The David and Denoyon family members, for the most part, sign by making their mark, except Etienne David, who shows good writing.

sources: the images of the contract come from the microfilmed registry of the notary La Rue on the site: http://www.ancestry.com the lands of Claude David and Antoine Desrosiers: Marcel Trudel, Le terrier du Saint-Laurent in 1663, University of Ottawa Publishing, 1973 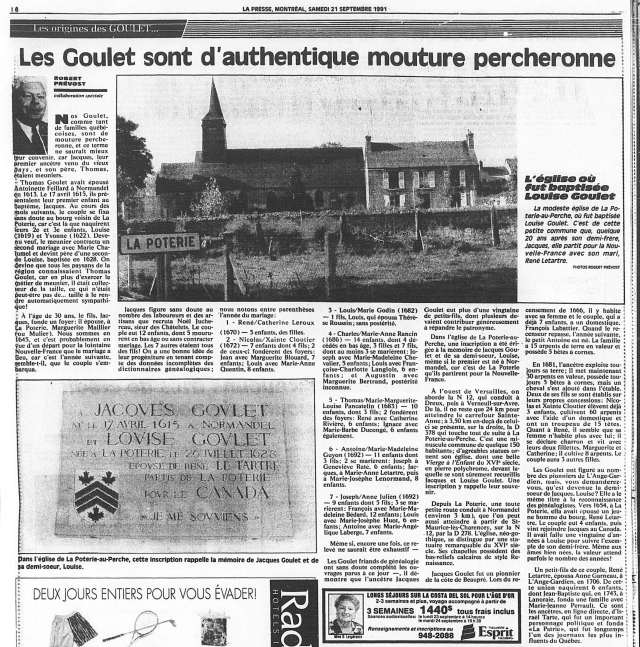 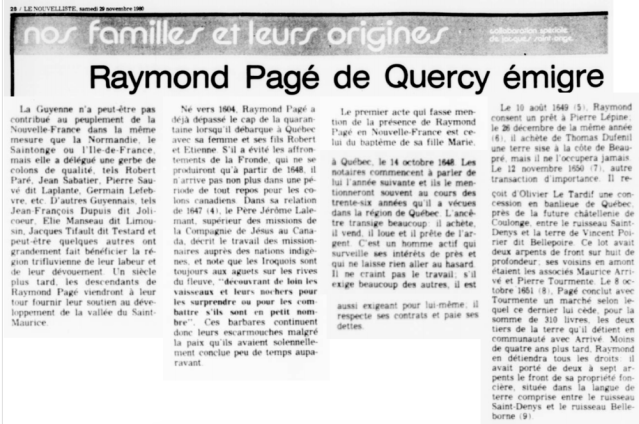 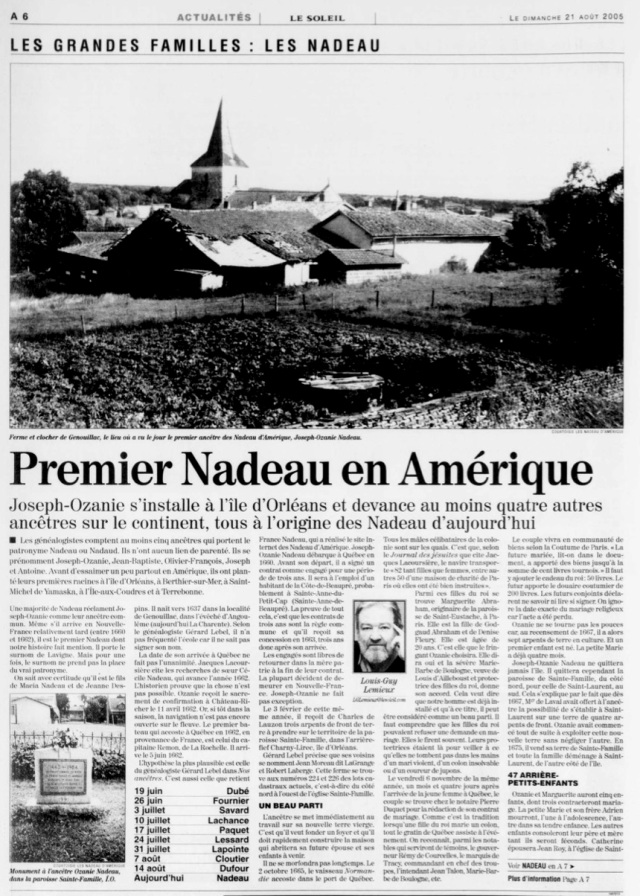 Learn about the The Raclos Sisters  in the chapter of Our French Canadians ancestors, Vol IV, February 2000, Chapter 24, Thomas J. Laforest, 2000 The lisi Press, pages 42-51. 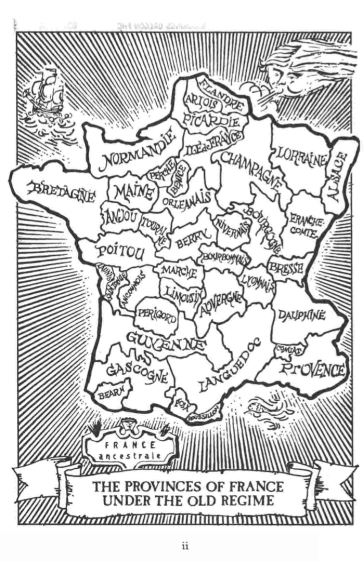 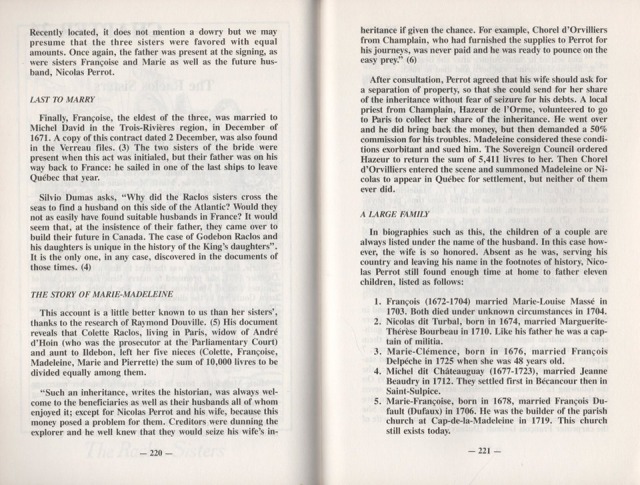